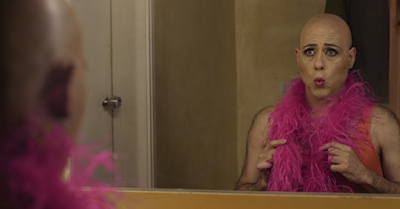 MIGUEL'S WAR is a trip. It’s one of the rare films that is impossible to pigeonhole and more importantly impossible to know where it its going.

The film is the story of Miguel who left Lebanon after 37 years ago and made a new life for himself in Spain as an openly gay man. The film is an attempt to come to terms with his past but it doesn't go as expected. As he says at the start of the film he thought doing the film would be easy. He would simply sit and answer questions about his life, however that isn’t what happened. It seems Miguel wasn’t telling the truth about a lot of things (for example Miguel’s real name is Michel named after the archangel) and in looking at the life he puts forward ends up opening a lot of doors he would prefer to keep closed.

Buckle up and sit back this is going to be one hell of an emotional ride.

This is a tough film. There are a lot of raw exposed emotions here. Its a journey without easy answers. The film is  tough because we connect with Miguel and we understand his refusal to deal with his past. Most of us would rather keep much of our lives buried and the thought of having all the twists and turns of our lives unearthed before a camera is something that would send most of us screaming into the night. Kudos to Miguel for having the strength to do it publicly

The film is also tough because Miguel is a tough guy to warm to. Its clear from early on he isn't going to tell us everything because he doesn't want to deal with it. The result is a guy we don't always like. He is at times prickly as he tries not to have to open the doors to his past, something we all know he is going to have to do.

I was moved. How culd I not, this is a complex film about a complex man that asks a lot of questions about how we related to our past and who we are really. How did we get to now? MIGUEL'S WAR wants to know and because of it we are forced to confront the arcs of our lives. This reflecting of ourselves in the life of a film's subject is what lifts MIGUEL'S WAR up from the pile of typical biographical documentaries and makes it something much greater.