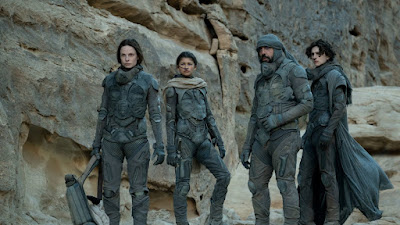 Denis Villeneuve​'s adaption of  Frank Herbert's world shaking novel is a masterpiece on it's own terms. Covering just over half the book the film moves like the wind in telling the story of Paul the son of a Duke who travels to desert planet with his family where he is set on the course toward ruling the universe when his family is set up and he is forced to hide in the desert.
Could I have made that sound any less exciting? Probably not, but I was trying to be brief and the plot of this film which cuts the novel down runs two and a half hours and only covers half the story. A great deal is going on and I could fill pages trying to explain it.
(An aside there are rumors that there is a longer cut in the offing that runs another 90 to 120 minutes, though I don't know if its true or if we will ever see it if it does)
While only telling half the story, and ending on a chapter ending not a full "The End" stop the film doesn't feel incomplete. If the second part doesn't come I can live with this half as a stand alone. At the Q&A that followed the first NYFF public screening Villeneuve said that Warners wanted to do the film but was hesitant to pony up for the whole film because his last film BLADERUNNER 2049 died at the box office.
Those of you who love the book should understand that this is the book, but not. Whole sections are missing (the Emperor and the royal court are only referenced but not seen) and yet whole sections are there seemingly verbatim. I was quoting dialog despite never having seen the film before. In my notes are notations about "where is this or that?" but the truth is those things are not needed in this movie (mostly) . I am curious if there is a longer cut things such as Shadout Mapes warning will be reinstituted. I suspect that this is as short as you can go without it being totally confusing (thus proving David Lynch was right to go for four hours to tell the whole story since the bastardized cut  runs 20 minutes shorter than this film and covers the whole story)
The problem with this being half the story is some that  things get shorted. Josh Brolin's Gurney Halleck for example had some people not familiar with the book or earlier adaptions confused since they didn't know why a big actor was in a relatively small role. It's because despite who it looks in this film, he plays a role in later events. There are a few other bits that are just there hanging if you don't know the novel. 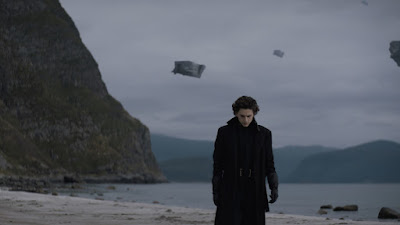 Despite my love for it I know the film isn't perfect. For example while I love the epic scope of the film, this is a huge wide imaged film where there aren't a lot of people. Watching it I was wondering where are the people in the edges of the frame. Its not bad but in many ways the film is only the people we focus on and no one else (or if we see crowds they tend to be faceless nobodys real or CGI). Though it is probably deliberate since once we get to the Fremen the scenes of people fill out as if we are now with real people.
While I can live with that and a few other minor flaws, there is one thing that bothers me which is that Lady Jessica seems wishy washy. She is overly emotional, especially for a member of the Bene Gesserit. In the novel she is a kick ass woman, as we can see when she bests a Freman, so the emotional swings seem off. It's not fatal but to be honest it does a minor injustice to a great woman. Outside of that there is nothing I dislike about the film.
How much do I love this film? Honestly I sent much of my first viewing sobbing (yes, really). This is the film that was in my head since I first read the book. This is how I saw these places for the last 40 plus years in  my mind's never thinking I would see it on a screen the right way. Villeneuve and his team got so much right (for me) that I was willing to go with any difference from what was in head.
As I said this is the book and not. Frankly this is ultimately Villeneuve's film which is perfectly fine. The original story is there just focused through different lens. Villeneuve has refashioned some of the themes for today. So as long as you understand that you will love this.
I saw this film twice in twelve hours and when it was done the second time, close to midnight, I was so hyped up on adrenaline I was willing to go again. Additionally when it was done I realized that the film had stopped being a film and like the book before me had become part of my soul.
My personal connection to the film aside I have to say that this is filmmaking at the highest level. Everyone and everything connected to this film is operating at near perfection.
I will not claim its one of the best films of the year, I'm too damn close to me for that, but I will be happy to argue  that it maybe one of the greatest scifi films ever made (and depending on if and when we get part 2 it maybe one of the greatest films ever. Full stop)
DUNE is why I love the movies. 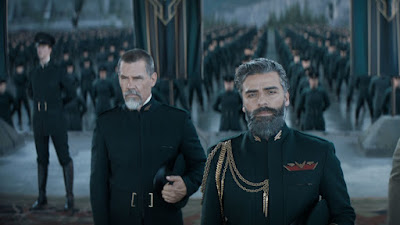