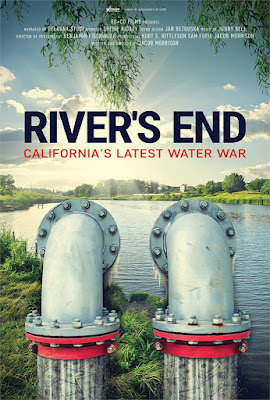 This look at the water situation in California is a dire warning to all of us about what we may be facing in the near future. As climate change alters which parts of the world are wet and what are dry there is going to be a battle of those with water  to keep their liquid gold while those further down the line will have to fight to get their share.

This is a good documentary on an urgent problem.  This is a film that lays out the potential conflicts that will be happening in the near future. If you are unfamiliar with what is going on this is a great primer on the subject.

While the film is largely focused on the situation in California we get hints of how similar battles are playing out elsewhere, for example there is a mention of how China is damning its rivers thus cutting off countries like Cambodia from the water it needs to survive. The expansion of the discussion allows for River’s End to have greater resonance be yond the American West Coast.