﻿Ariela Rubin on MARK, MARY, & SOME OTHER PEOPLE (2021) which opens Friday 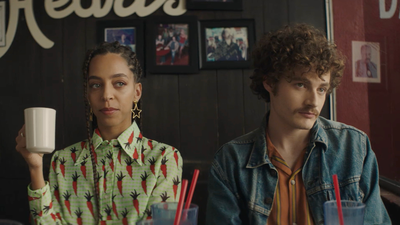 Mark and Mary meet at a grocery store where Mark reminds her that they had met in college. He asks her out, and a year later, they're getting married, they even have each other's names tattooed in a heart on their arms. Their relationship is very cute. Everything is good and then one day Mary puts having other partners out on the table, "ethical non-monogamy".  Mark immediately dismisses it, but then after Mary keeps bringing it up, he eventually decides to give it a try. They make rules and then give it a go. They even help each other with their dating profiles. But of course with most stories, when couples try an open relationship, things don't always go so perfectly.

I found both Mark & Mary likeable characters. I liked their chemistry and their relationship. There was some humor in it, but nothing that made me really laugh out loud.  I enjoyed the movie, it always kept me interested, but found the ending lacking. The whole story seemed fluid until the end, when they didn't really explain how they went from point A to point B.

There seems to be a pattern in these Tribeca films that I've seen so far, where I like a movie and then the ending is just meh.. nevertheless, while it's not Oscar worthy or anything, it's a fun one that I recommend watching.