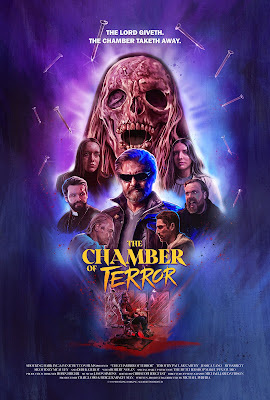 This comedy horror film is about an ancient evil unleashed in a town and the efforts of a woman with an unexected job tasked with stopping it.

Broad bloody comedy is a mixed affair. While the film has more than it's share of genuinely laugh out loud moments  they over shadow the horror to the point that there never is any scares. Yes we're enjoying orselves but there never is any real sense of suspese since we pretty much know that the nasties are not going to get to the main characters.

I know that may sound like I didn't like the film but I did. I liked it a great deal, I just wished it had some genuine horror in it instead of being a bloody comedy.

That said, I know I wold have lved this more had I seen it in a theater with an audience set for a good time.

A must at Blood in the Snow, and worth a look for everyone else.

Email ThisBlogThis!Share to TwitterShare to FacebookShare to Pinterest
Labels: comedy, horror, The Blood in the Snow Canadian Film Festival 2021