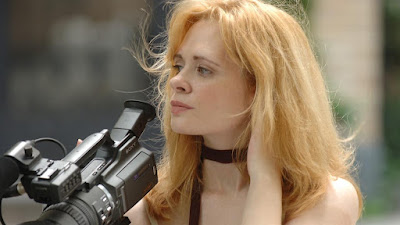 Adrienne is a portrait of writer director and actress Adrienne Shelly by her husband. It’s an attempt by Andy Ostroy to both come to terms with the loss as well as to give their daughter a sense of what her mother’s life was like.

While the film is extremely heart felt and encyclopedic it pains me to report that the film isn’t particularly good. It’s not that the film doesn’t have everything you would want, it does, the problem is that the telling is extremely jumbled. This is a film that bounces around from thing to thing and back again on a train of thought that doesn’t make sense to an outsider. Blame director Ostroy who is clearly way too close to the material.

If you want an example consider that the film is constantly swinging back and forth through discussions of Waitress the musical and the last day of Shelly’s life. While I can understand beginning with the both of them and coming back toward the end, the way the film is structured now  the film bounce back and forth to the subjects all through the film. There is no narrative flow.  The film should build to something, it never does, it just sort of lies there.