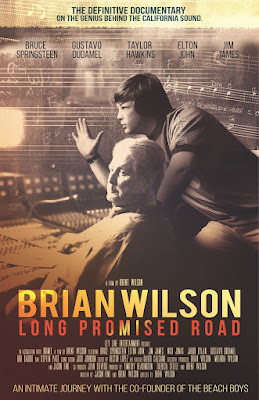 This is a loving portrait of the main force behind the peak years of the Beach Boys. If you’re not already a Brian Wilson fan this is a film that will make you one.

TO be honest I went into this film liking Wilson but not thinking he was anything special. Coming out of it I became even more impressed. I mean the man had the Beach Boys record one song in multiple studios so that he could use the acoustic strengths of each to his advantage. I had never heard of anything like that.  The film is full of icons of the last half century of popular music singing his praises and telling us how he changed the world and why it matters.

This is a great story.

If the film has any weakness it comes from two places one small and one big. The small one is that the film is a bit too loving. Everyone’s words are a bit too dripping in sugar. Yes Wilson deserves it but how it’s put together comes off a little too loving.

The bigger problem is that the person who is interviewing Wilson a much too loving. The result is that a  number of his questions come across as cringe worthy.

But the problems are minor and what matters, Brian Wilson’s genius comes through.