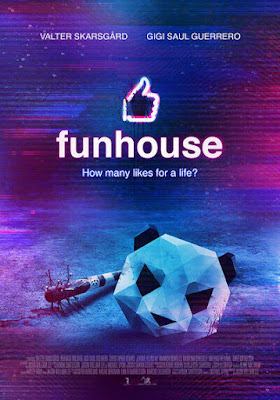 Funhouse is only a going to be fun for sadists the locked ward on death row. For anyone else it’s going to be an ordeal to get through, not because of the violence,  but because the plotting is so brain dead that you really you can’t believe a living breath person came up with it.

The plot of the film is a spin on Big Brother. A whole bunch of semi-celebrities are put into a house where they are monitored for 24 hours a day 7 days a week . Instead of getting voted out of the house the losers is killed in some sick and twisted way (Beaten by a bat or dipped in acid)

Made with a psychopath’s idea of tongue in cheek the film opens while a young woman is debased into killing another woman by seemingly disinterested man who half heartedly watches the murder as he scrolls on his phone. It’s sequence that is played for laughs. The trouble is that not having a context it just plays as sick and misogynistic. Its simply a well dressed man abusing the shit out of a young woman. Unless you like abusing women the sequence craters interest- and builds up a wall to everything that happens next.

After a quick introductory series of sequences introducing the characters we are dropped into the “show” and we watch as the people in the house realize that they are in for real trouble as they are not voted out of the house but killed off in gruesome ways.

If the opening sequences wasn’t bad enough what follows is worse as things just never make real world sense. Why is this happening? We really don’t know…at least not early enough for us to accept it. Additionally why are the house mates not okay, and then okay then not…. With the terrible things that are happening? Plot turns just happen. Its as if the filmmakers just wanted to do something nasty just to do it because they thought it was cool.

Its not. Its mean and ugly.

If the film is supposed to be a poke in the eye, it’s a failure. Outside of being offended by the opening sequence I never really reacted to the film except with a steady stream of “ that’s stupid” with each line and plot turn.  Yes the film has some technical ability, but that doesn’t give us a narrative that I’d want to experience. Even a sociopath relating all the terrible things they would want to do with you could relate a better tale than what we have on screen here. Worst of all even as a catalog of terrible things its not that imaginative.

I will not question how this film got made, lots of untalented people have deep pockets,  nor am I asking how it got picked up for release (on Hulu)  because services need content, I’m questioning why this was programmed at film festivals since the film is so bad no rational programmer should have programmed it unless they were paid to do so.