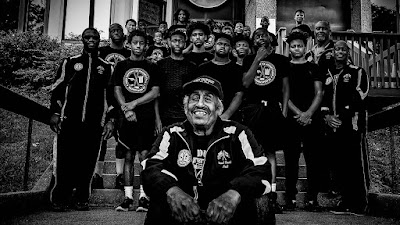 THE CANNONS is in its way a deceptive documentary. I don’t mean that in a bad way, rather I say that because I went into the film expecting a film that was going to be a sports film. I thought it was going to be a film that was primarily about hockey. The truth is that while the film is about Neal Henderson and the Fort Dupont Hockey Cannons, the film is much more. It’s a film whose construction lifts it up from being just another sports documentary or even another look at a depressed area and turns it into something greater than either of those forms could muster on its own.
The film is nominally the story of the Cannons and it’s coach. The team was founded in the late 1970’s as a means of helping keep kids off the street and giving them a place to go, a structure to their lives and people who care. The program was so successful that it spread around the country. Most importantly it kept a lot of kids out of trouble and on the path toward a better life.
While most films like this either follow the coach or the team leaders through a season, or one or two kids as they go through their daily routines, THE CANNONS manages to follow both branches of the story without weakening either. We get to follow the lives of the young men who are in the program and Henderson as well, resulting in an excellent look at why this program works, and why we need more program of a similar nature. The film works as well as it does, thanks to the directors Steven Hoffner and AJ Messier, who manage to clearly show us all the working parts, but also find people like Robert Lynch, who reveal how how the program is helping them. There is a scene early on when he is talking about how he lost his father and how other kids around him don’t have fathers.  As he says there is no one around to show him what it means to be a good man, however he said that his mother and the program can point him in the right direction.  Its an incredibly powerful moment since it’s a moment of awareness that is real and emotional. Normally in films like this, this sort of piece of wisdom comes from an academic  not from the subject of the film. And often even if it is from the person the film is about a lot of times it feels some-how artificial- which was something I never noticed until Robert spoke his truth.
I was moved.
Actually I was moved repeatedly by this film. Yes this is a story that has been told in one form or another, many times over the years (and trust me I’ve seen many of them).. However this is the first time where it didn’t feel forced or window dressed.
THE CANNONS is film of great power and is recommended.
Posted by Steve Kopian at November 10, 2021