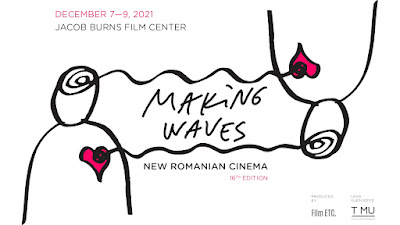 New York, November 29, 2020 —  Making Waves: New Romanian Cinema is proud to present a compact showcase of the 16th edition of Making Waves with four brand new Romanian films to be screened Dec. 7-9 at the Jacob Burns Film Center before its online premiere in early 2022.

This year’s showcase invites dialogue and reflection through four challenging films, with in-person participation from directors Bogdan George Apetri, Eugen Jebeleanu and actress Ioana Bugarin. Whatever happened to tolerance? How do we relate to those who are different, like the prime suspect in Unidentified by Apetri, or the main protagonist of Poppy Field by Jebeleanu? What is the limit of empathy when one thinks about the problems of others, as Radu Muntean asks in his seventh feature Intregalde? Is the pragmatic vision of the world at war with the faithful one, as suggested in Miracle, also by Apetri? In a world that’s seemingly divided beyond reconciliation, and where cancelling threatens to replace embracing, is there still room for understanding the other or is it just a fantasy?

The JBFC is proud to join Film ETC Association in co-presenting the 16th edition of Making Waves: New Romanian Cinema, the long-standing Romanian Film Festival in New York. The festival is produced and curated by Corina Șuteu, Mihai Chirilov and Oana Radu, the core team that initiated and has organized the festival since 2006.

The 16th edition of Making Waves: New Romanian Cinema is presented by Film ETC and the Jacob Burns Film Center. Lead support for Making Waves is provided by the Trust for Mutual Understanding and the JBFC Program Fund, with additional support from the Romanian National Film Center and individual donors.

“It's a tale of mystery, of scalded innocence, and of the staggering evil that ordinary men can do” — Variety

A 19-year old nun, promising newcomer Ioana Bugarin, sneaks out of an isolated monastery to attend to an urgent matter in the nearby town. Seemingly unable to solve her problems, she rushes to return to the convent, but things go awfully wrong on her way back. In a perfectly mirrored structure, the story switches to the police detective who investigates against the clock, collecting clues and facing twisted revelations as he tries to understand what happened to her. Employing a realistic approach and told through suspensefully unbroken takes, Apetri’s revenge thriller touches on spirituality, prompting viewers to ask themselves if there’s still space in our times for something sense and science can’t explain.

Despite mounting debts and a troubled personal life, a hot-headed police detective becomes obsessed with a hard case no one seems to care about. Ordered to put down the file, the cop goes rogue and comes up with a suspiciously convoluted plan designed to frame the apparent suspect, a security guard of Roma descent. There’s more than meets the eye in this slick and bleak neo-noir that tackles power abuse, corruption, and prejudice while slowly building up to a dark, staggering finale. Simultaneously shot by New York-based Apetri in his native town in Northern Romania, Unidentified and Miracle belong in a yet-to-be-concluded trilogy and share several key characters, but each works as a standalone piece, too.

“This adept first feature quickly gathers momentum, delivering a knotty portrait of a man who, like the culture in which he lives, is still wrestling with the very idea of homosexuality” — Screen International

Just as his long-distance boyfriend comes to visit, Cristi (Conrad Mericoffer), a young police officer, is called in for an intervention at a movie theatre, where a homophobic group has interrupted the screening of a queer-themed film. This is the starting point for a piercing portrait of a man at odds with his sexuality, trying to find a balance between his job in a macho, hierarchical environment and his personal life as a closeted gay person. The situation worsens when one of the protesters threatens to out Cristi, triggering a complex domino effect related to his identity. First-time director Jebeleanu creates, almost in real time, a tense huis-clos drama about censorship and self-censorship in a world that makes it hard to be free if you are different.

Three middle-aged do-gooders get stranded while taking part in their traditional end-of-the-year humanitarian trip, driving an SUV along the mountainous dirt roads of the Romanian village of Întregalde. Blame it on the damn unpaved trail, or the lonely old man they wanted to help by taking him to the sawmill, where he supposedly works. When the cold sets in and the sawmill proves abandoned, the trio is forced to spend the night stuck with the senile old man and find their ideas about empathy and charity seriously challenged. Although set on a Blair Witch Project-like territory, the heart of this intriguing modern fable previously shown at the NYFF is elsewhere – namely in the true meaning of one’s good deed.