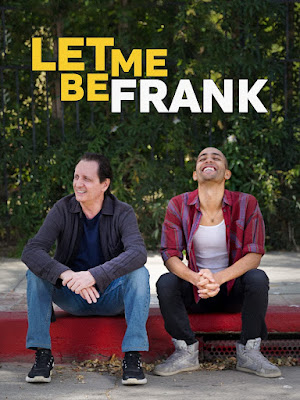 In LET ME BE FRANK a wanna be rapper (played by writer director Ryan Silva) ends up spending time with Frank (Freddy Andreiuci), his landlord, a guy he doesn’t really like at the start. Over time they become friends.

Let me sing the praises of Ryan Silva.

Silva has made a super little buddy film. This is film that is great time with good people. What makes this film so good, beyond the winning performances, is Silva‘s script. It’s a beautiful marriage of dialog and situations that you really don’t see in the vast majority of films.  Normally there is a progression of how relationships and conversations will go but Silva subverts that. There is progression that isn’t perfect in a cinematic way, but in a real way. Sitting watching the film I stopped thinking I was watching two characters, but rather I was watching two people talk and converse. There is a naturalness to it. The result is we warm to the pair to the point that I would love to see what happen next.  I don’t think a direct sequel will work But I’d love to see something more where the conversation continues. He’ll I’ll take another film from Silva where he and Andreiuci do something similar.

This is a sweet hidden gem you should try.