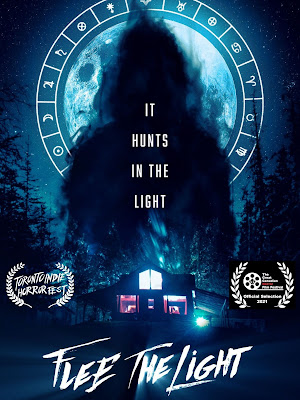 A psychologist tries to help her sister overcome a deep psychosis but discovers there is something darker than she could have imagined behind it.

This is a genre bending film that often doesn't seem like it's a horror film, at least until later in the film. Its a one of a kind viewing experience that is going to work best for some people over others. I'm not being flip here, I say that because the film is probably not going to work for anyone who wants a film to be one thing. I myself was all over the place concerning the film because going into it I expect a pure horror film (it is playing Blood in the Snow) but I was then confused as it went it's own way. I final just went with it and had a good time.

What I like about the film is that it doesn't do what is expected. I like that director Alexandra Senza and writer Jennifer Mancini chose to mix things up because the result is a film that sticks with you and doesn't get lost among the hundred similar films.

Worth a look for those who want something different.

Email ThisBlogThis!Share to TwitterShare to FacebookShare to Pinterest
Labels: drama, horror, The Blood in the Snow Canadian Film Festival 2021