Nate Hood on Mission: Joy (Finding Happiness in Troubled Times) ★★★ which is playing Monday at the Port Jefferson Documentary Series 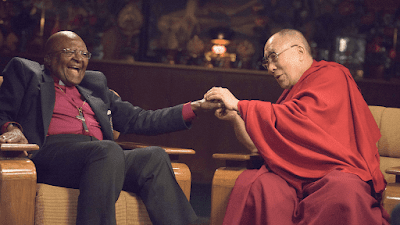 [This piece was originally published in the monthly newsletter for the First Presbyterian Church of Delray Beach.]

On the surface, it seems difficult to find two men more different than the Archbishop Desmond Tutu and Tenzin Gyatso, the 14th Dalai Lama. One is a Christian, the other a Buddhist. The first was born and raised in desperate poverty in apartheid-era South Africa. The second was raised as royalty in a lavish Tibetan palace. Tutu’s upbringing was heavily influenced by his loving mother and abusive father; Gyatso was taken from his parents at two years old and raised by monks. Desmond has spent his life in his native country; Gyatso has lived in exile for fifty-six years. Finally, one has given his life to God while the other is literally considered one by his followers. That both men have been instrumental figures in modern human rights struggles, each winning the Nobel Peace Prize for their efforts, isn’t surprising. That the two diametric opposites are dear friends is.

First meeting at a museum in New Jersey in 1990, the two holy men hit it off right away. One of Tutu’s daughters describes the two octogenarians’ energy together as being similar to that of “eight year old boys.” Indeed, when the two reunite for the first time in years for the filming of Louis Psihoyos and Peggy Callahan’s Mission: Joy (Finding Happiness in Troubled Times), not even the strictures of age can keep the two from giggling and joking like schoolchildren. As the wizened Tutu departs his plane in Dharamsala, India and reunites with Gyatso on the tarmac, their years positively melt away as they tease and embrace each other. In this moment, the two are young again.

It seems appropriate then that the topic for Psihoyos and Callahan’s documentary is, as the title suggests, the nature of joy and whether or not it’s feasible in today’s world. The film is predominately an interview with the two holy men as they’re asked various questions about it as well as questions concerning hope and despair. Animated interludes recreating scenes from their childhoods demonstrate their familiarity with all three: Tutu with his experiences with poverty, abuse, and racist violence under apartheid; Gyatso with losing his family, home, and homeland at the hand of Chinese invaders.

Yet their answers are astonishing similar: happiness and joy come from two places. The first is from within. “The ultimate source of a meaningful life is within ourselves,” Gyatso explains. One can choose to wallow in despair over one’s circumstances or one can choose—the key word here being “choose”—to recontextualize one’s life. Gyatso uses his own life as an example. Instead of viewing his life in exile as a tragedy, he’s deliberately reframed his experiences in his mind as a unique opportunity to escape the “Golden Cage” that trapped generations of Dalai Lamas in their monastic estates. Unlike other Lamas, he’s been afforded the chance to travel the world and learn about things he otherwise couldn’t. To reevaluate one’s life as a refugee in political exile as a blessing in disguise takes a superhuman level of mindfulness, and I sincerely doubt Gyatso would be so cruel as to suggest other people going through intense trauma should merely seek the silver lining. But I am reminded of the ending of Martin Scorsese’s Kundun (1997), a biopic of Gyatso that ends with him answering the question of whether or not he’s the Lord Buddha by saying: “I believe I am a reflection, like the moon on water. When you see me, and I try to be a good man, you see yourself.”

The second source of joy comes from helping others. Here the film turns more emphatically towards Tutu’s struggles as an anti-apartheid civil rights leader, risking life and limb to help free his fellow Africans from the last bastion of politically legalized white supremacy in Africa. Through acts of service, he was able to find compassion not just for his fellow persecuted blacks but for the white police officers and soldiers who terrorized them. At several points in the film scientists and clinical experts are brought in to comment on Tutu and Gyatso’s teachings and one of the most astonishing of these comes when Dr. Sonja Lyubomirsky of UC Riverside is asked to corroborate Tutu’s claim that acts of kindness can change someone. She answers in the complete affirmative, explaining that medical trials have demonstrated that people who consistently perform acts of kindness see their blood and RNA transform on a biological level to better match a healthy immune profile. Helping others, being compassionate, acting kindly…all these things literally rewrite our bodies to live stronger, longer lives. It would seem the Most Reverend Archbishop Desmond Tutu has a point. But then, so too does His Holiness the Dalai Lama about personal mindfulness. Indeed, the film seems to argue that the Buddhist notion of interior cultivation and the Christian emphasis on acts of service are two halves of the same coin. It is by combining both that one can find the same kind of joy, the same kind of happiness, that these two old men share in each others’ presence during their twilight years.