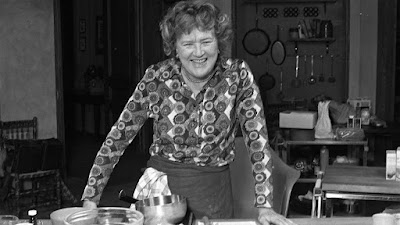 Portrait of noted chef Julia Child by the people who knew and loved her.

CNN produced documentary is a hagiographic portrait of a woman who became best known for cooking seemingly unhealthy food we all could enjoy. It’s a film that firmly shows us that Child changed the way the world ate because she made cooking interesting and something we all wanted to do. Its also a moving love story of a woman and her husband who were not just husband and wife but best friends and co-conspirators in enjoying life.

Sadly the film bored me. While I learned a great deal about Child there never were no real ups and downs. We really don’t see anything bad or even questionable other than her feelings about gays before AIDS made her realize she was wrong. It’s not that there couldn’t be a dark side, it’s more that everything is skittles and beer even though there have been some stories of her prickly nature. There also really isn’t any sort of adversity in her tale other than she kind of lost a connection with her father who remained a conservative Republican.

To be honest none of this is bad, but unless you are a huge fan of Child this saccharine portrait is too much of a good thing.