The Beast Within (1982) Thanksgiving Turkey 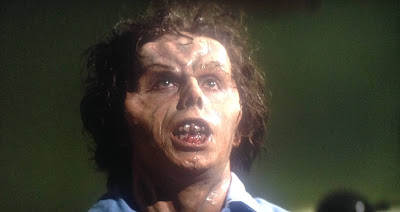 Absolutely awful film about a woman who was raped by a giant cicada. Nine months later she gives birth to a baby. The baby grows up 17 years later to be a homicidal maniac before turning into a giant bug himself- who may or may not be possessed by the sprit of someone else...

Despite having a good tie in novel THE BEAST WITHIN is a horrible film that you not only laugh at but also makes you want to throw poo at the screen. This turd ball is quite simply one of the worst films I've ever seen. It's not even so bad its funny, it's just soul killingly bad.

Paul Clemens as Michael, the bug, plays it so far over the top as to be in another galaxy.  Its one of the all time bad performances and kind of needs to seen to believed. Or not I can't honestly inflict this on anyone.

The rest f the cast, RG Armstrong, Bibi Besch, Ronny Cox, LQ Jones and others are fine, but honestly when are they not? But even they can't save the film.

As for the effects  pure rubber and balloons. Made after air bladders became the rage in special effects e are inflated to the point of looking like children's balloons.

I hate this movie.

I've hated it for almost four decades when I saw it as a senior in high school. (And I know it didn't help that I got dropped off to see this so I couldn't walk out and just go home. I had to wait for my dad to pick me up from the theater)

Avoid it unless Rifftrax does it.