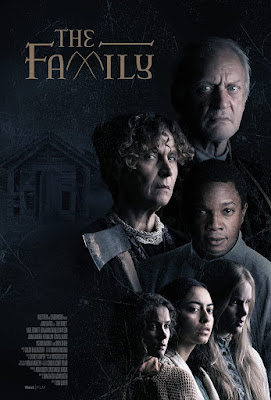 In what appears to be the late 18th or early 19th century a family is lorded over by a father who reaches fire and brimstone lest the fmily be destroyed by the dark forces just beyond the woods. However the arrival of a new member begins a slide for destruction early on.

I like this film and it's oppresive atmosphere but at the same time I have real issues.

If you like a folk horror films with religious over tones and and evil patriarchy this film is for you. This film is a truly nightarish creation with an evil father lording over his family. Yes, it can be more than a bit over the top but it still sends chills up and down your spine.

Unfortunately the film has two problems with it that kind of keep it from truly being great. The first problem is simply that it doesn't do anything we havent seen before. While that isn't a bad thing, but when it gets so much right the fact that it doesn't brek any new ground is disappointing.

The other more troubling problem with the film is that pretty much from the first frame you know where this is going. I saw something right at the start and I knew if it wasn't a mistake, and it wasn't, it as going to go one of two ways and then it did.Of the two possible ways to go it chose the less interesting which resulted in a big sigh from me at the end.

While slightly disappointing in outcome THE FAMILY is still worth seeing for the ride.

Email ThisBlogThis!Share to TwitterShare to FacebookShare to Pinterest
Labels: horror, The Blood in the Snow Canadian Film Festival 2021, thriller