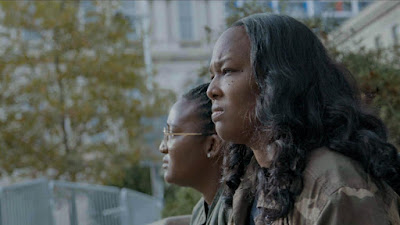 Director Sonja Sohn's THE SLOW HUSTLE is a film of quiet power.The film is the story of the Baltimore Police force, a corruption investigation and the death of officer Sean Suiter which still remains an event with too many questions lft unanswered.
THE SLOW HUSTLE is a film that will leave you wanting to know more. As the film unfolds a lot of questions are raised and lot of them are left unanswered. Part of the problem is that authorities botched things from the get go and even on the most basic level, such as saying which side of the head he was shot in. Nothing was transparent and since Suiter was killed the night before he was to testify about police corruption motives are questionable. Even when the film ended I still wanted to know what happened.
That is not a flaw rather it is testiment to Sohn's filmaking and search for the truth. She doesn't give us what she thinks are the answers she gives us what she and the world are being told are the answers and she is letting us draw our own conclusions. The result is we are left wanting to know more.
What I love abut Sohn's filmmaking is she never telegraphs anything. If you are like me and don't know the story, you are not going to have any idea where this is going to end. Its a puzzle that keeps showing us doors we can walk through up until the final fade out thus keeping us invested until the very end.
This is a great film and very recommended.
Posted by Steve Kopian at November 16, 2021