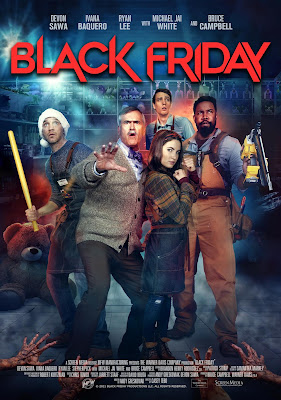 Once BLACK FRIDAY gets up and moving this is a nifty science fiction thriller. It's a nice mix of monsters and mayhem with a heathy dose of humor (hey Bruce Campbell is in this).

The plot has a meteor like thing crashing through the roof of a box store early on Thanksgiving. As the small crew is setting up they soon find that there was something on the meteor. Soon the rest of the staff has banged in and the doors are open and things begin to get messy.

Hitting a lot of the expected points and lot more unexpected ones BLACK FRIDAY entertains. It never reinvents the wheel, but it holds our attention way more than many other similar films because it plays things pretty straight. To be certain some of the jokes are predicatable (shoppers as zombies for example) bt more times than not it keeps things fresh so we don't know where it's going.

I had a blast to the point I'm considering a rewatchwith the family after the Thanksgiving dinner is done.