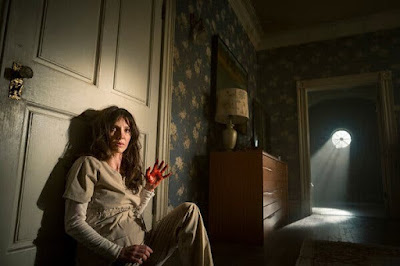 James Wan returns to horror with a huge WTF disaster of a film that I might have enjoyed as a cheapo direct to video film that had a budget of half a million dollars, but as a 40 million big studio film its a real head scratcher.

The plot of a film has... no f-ing connection to reality. Basically an evil male twin is living in the brain/body of his sister. Why and how this is happening is beyond me. Its physically impossible, but he's pissed off and he wants to kill the doctors, his mother, and anyone getting in his way.

I sat there gob smacked, watching the film, desperately trying to sort out what was going on and failing miserably. This is a film that defines suspense as doing things that are completely unexpected. Frankly I would have not have been surprised if  Peter Sellers showed up because- why the hell not. Nothing in this film-NOTHING- makes sense even on it's own terms. It can't because it has no reality of it's own, it just has things happening because.

Worse this film is derivative of about 97 films. Every twist and turn feels like it comes from another film. I was thinking of bits from I,MADMAN to THE FOG to SISTERS to SAW to...how many films do you need?

And while the film is gory bloody it never makes sense. I mean they break a bone or do something bloody and and all I could think was it this as real it wouldn't look like this.

What a freaking turd ball.