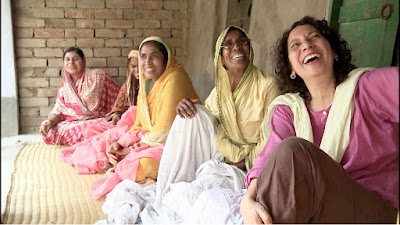 Fatima Shaik is an African American writer with ties to New Orleans going back four generations. Her Great Grandfather  came from India and made a home in the city. Feeling the need to connect with him and her heritage she take a trip to India in order to find out more about her family.

Kavery Kaul's wonderful film is one part family history, one part celebration of New Orleans and one part eye popping travelogue  to India. This is a film that two minutes in had me wondering why the hell I wasn’t seeing it at an in person screening. I say that because the film’s sense of place, both in New Orleans and India is amazing. You get a real sense of being there in person. Not in a travelogue sort of way, but a genuine you are there sort of way. I can only imagine how much stronger the feeling is in a theater.

I absolutely love this film. Beyond the images, I love how the film blends the various elements of trying to connect to the past and to a culture we know little about. Shaik’s connection to India was a blended one before she made the trip. After going and seeing and experiencing it became something else. This is a film that clearly shows how the stories we tell shape us and our world view.

This is great stuff.  Twenty four hours after seeing it I was still thinking about. I was also talking to various people about the film just because unlike most other films it felt alive and wondrous.