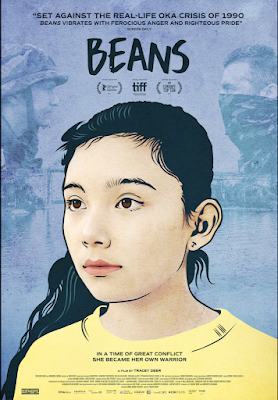 BEANS is the story of the 1990 Oka Crisis at Kanesatake in Canada as seen in through the eyes of a young Mohawk girl. The Crisis was sparked when it was decided that in order to build a bigger golf course the government was going to take over a First Nation burial ground. It sparked a months long stand off that tore open the country as the buried racism and disrespect for the First Nation boiled out.
I had previously caught BEANS earlier this year at another festival. I didn't review the film then because at the time I didn't know what to say. Sometimes when you see a film at a festival words get lost. Some times you need to revisit and reconsider a film.
BEANS is a killer film. There is a reason that the film has won numerous awards, its a moving story. Actually its a vital story in todays world since it lays bare racism. While it specifically speaks of the racism of white Canadians against the First Nation, something we are reminded of with yet another discovery of a mass graveyard of children who were stolen from their parents, the film also speaks of the racism in an America living in a Trump infused world where the right feels its okay to hate. I was chilled by many scenes in BEANS such as the one where or heroine's family has rocks thrown at their car as they pass by.
While the film is a little too neat in it's structure, we are in too many places too conveniently, the film is still moving, and perhaps even shattering.
One of the most important films of 2021. BEANS is recommended
Posted by Steve Kopian at November 02, 2021