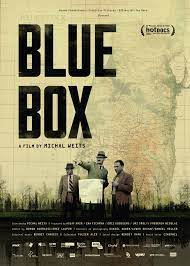 Blue Box is a great film that transcends it’s stated subject to speak volumes about how we see the past. In an age where we are reevaluating our history Blue Box  forces us to realize that the stories we have been told may not be the whole unvarnished truth.

The film is the story of director Michal Weits looking at the story of her great grandfather, Joseph Weits. Weits was the legendary man who started building Israel decades before the creation of the state by the UN. What he did was to buy up lands in Palestine create forests and places for Jewish people to live.  The story goes is that he bought up lands no one wanted or lands where no one was living and started to turn them into productive communities. It’s a story that Weits family tells with great pride.

However Michael Weits digs deeper. Looking into official records as well as her great grandfather’s papers the reality she found that the truth was considerably different. Her grandfather most certainly bought up land with the intention of giving the Jews a foothold, however the deals he was making to buy the land more often than not ended up displacing families who had been living there as tenants of landlords scattered across the globe who sold the land out from under them. While it was all legal, many of the deals could be seen as morally questionable. If nothing else the lands were not uninhabited. The revelations alter the way how Michal and her family now see their history.

This is a beautifully made film. It’s a film that carries us long with its revelations and makes us thinks about our own history.

This forcing of us to reconsider our history is what lifts the film up to be something more. I say this since where we are in the United States we are struggling to deal with our past. Really looking at our founding fathers and those that followed  them has revealed them to be something much more complex, an not always as pretty as we would like to think. This is especially true in regard to the confederate heroes whose statues are being removed at a record pace. While many people have been taught that they were all good men fighting for a question of State’s rights, the examination of their personal papers and the records of the time are painting them in a damning light. In light of how we see the world today they were not nice guys but rather bad guys. It wasn’t state’s rights but racism that drove many of them to fight.  For many these revelations have shaken their  beliefs

I really loved this film. Not only does it tell one hell of a story, but it also shows us on a large level how we got here and how we have ordered the world to make it so.

The Blue Box is playing at both the Other Israel Film Festival.