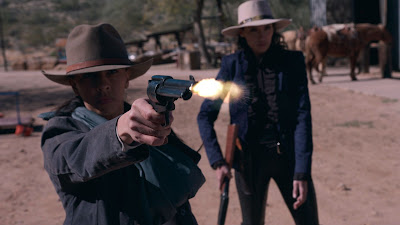 When bad men break into the Silva's family cabin and kill everyone except young Regina they set in motion a plot for revenge. When Regina finds she can't get justice through legal means she learns the way of the gun. Taking a job in a brothel she finds the man she sees is in the town and protected by the sheriff and many of the towns folk. Turning to the ladies in the brothel she plans to get justice.

Good low budget western scores a lot of points by not being your typical all male western. The fact that women are firmly at the center of the film means that the film opens its up to other takes on the well worn western cliches. Things do not play out exactly as expected and we are better for it. I also love that the small town is small and not looking like its a big town as you might see in other similar tales.

While the story and most of the performances held my attention I kind of wish it had been paced a little brisker. While I understand this was the pace of the old west, a a bit more speed would have helped carry us along.

Nitpick aside, BADLAND DOVES is recommended for those who like westerns.