No Straight Lines: The Rise of Queer Comics (2021) starts Friday 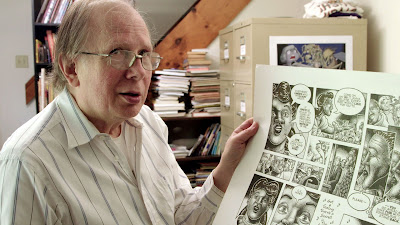 This is a celebration of LGBTQ comics as told by some of the comics creators such as Alison Bechdel (Fun Home), Jennifer Camper (Rude Girls and Dangerous Women), Howard Cruse (Gay Comix), Rupert Kinnard (B.B. And The Diva) and Mary Wings (Come Out Comix).
This is going to be a two part review. The first is going to be a short take on the film as a celebration of the comics and the creators and the second is going to be a discussion of  the film as a film.
As a celebration of LGBTQ comics this is a joyous experience. It is a glorious love letter to the writers and their stories by someone who loves them and wants to share them. It is a film that is full of magnificent moments (some of which brought me to tears (Alison Bechdel's "card" for Rupert Kinnard had me full on crying with its thoughtfulness and magic).
This is glorious primer on the art form that anyone interested in comics and especially queer comics should see.
However as a documentary and not a  celebration this film needs to be expanded and tightened up.
Running a scant 78 minutes it is much too short to fully do justice to all of the stories here. All of the artists profiled need fuller profiles. Howard Cruse's work as an artist and editor is deserving of a whole film alone. Actually that could be said of everyone on screen since I really wanted to know more about all of them. (I want to hear more Rupert Kinnard stories). I think the film would have benefited from more information that put their stories into a more detailed context.
The problem is there really isn't a real through line. There is no sense of when certain things happened, except in a general sense. While Vivian Kleiman clear knows the history the story of when things were happening and how isn't on the screen. There are frequent moments of commentary by younger artists which while let us know the importance of events and of the comics, muddy the sense of when these things are happening. What I am saying that in a weird way there is no big picture, just a bunch of little ones that don't fully make a big one.
I do understand that part of my criticism is coming from the fact that in the last six months I have seen four or five films on underground comics and comic artists. While some of those films were better and some were worse the through lines that linked up the stories in such a way that we got a image of a bigger picture than just the artist or genre that is the subject,  NO STRAIGHT LINES doesn't really connect it up to the world except when we move toward Fun Home on Broadway.
Don't get me wrong I like NO STRAIGHT LINES but I wanted to love it.  At the same time I completely understand that this film was never meant for me, a straight guy.
That said, as I said above if the subject of queer comics interests you, NO STRAIGHT LINES is a must.
Posted by Steve Kopian at November 09, 2021