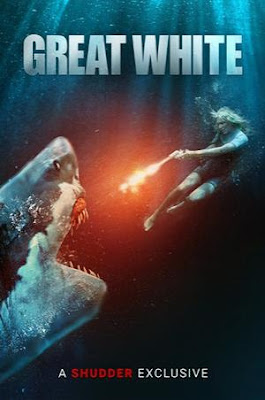 Five people on a sea plane are stranded at sea when a great white shark eats their plane. Can they make it to the nearby uninhabited island before they become the main course.

Good looking but rather dumb  shark attack film is one of the most poorly plotted shark films I’ve seen in a long while. The film lost me early on when it became clear that the film was going to have things happen just because. It starts when  after the pre credits shark attack when a woman is climbing  back onto the boat only to have a rope break and knock her into the water. It doesn’t make any sense. It continues on through the rest of the film, most notably when the shark attacks the sea plane’s pontoons for absolutely no reason. I mean in JAWS 2 the shark attacked a hovering helicopter, in this film the plane is just sitting there. Nothing in this film makes any sense.

Even worse is the pacing of the film. The dully edited action sequences are punctuated by long stretches of boredom. The film opens with an attack and it stops dead for a half an hour as nothing much  happens.  (Okay yea they find a half-eaten body on the beach  but I’m still trying how it ended up that far up the beach under a tree... And it’s decaying and the cellphone has a charge… as I said above the film makes zero sense.) From there its a brief (in)action followed by stretches of boredom.

On the plus side the effects look good, better in some ways that larger productions such as MEG, but they aren’t enough reason to waste your time on this water logged turkey