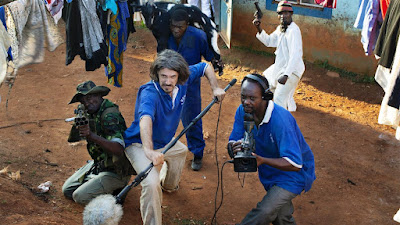 This is a look at the Ugandan film industry known as ‘Wakaliwood’. and the mad man at its head Isaac Nabwana. Nabwana makes wild and crazy low budget action films that harken back to the crazy Cannon action films of the 1980’s. They are big on motion and not so big on logic. They are also incredible fun in the best sort of a way because they are aimed at just having fun.
How you react to the film will be determined by how much you know about ‘Wakaliwood’.. If you don’t know anything about it then odds are you are going to love this film. It’s a great film and it shows the mad passion the filmmakers have for turning out films.
On the other hand if you’ve seen an earlier expose on the studio then odds are you will know all of this already. I’ve seen several stories and films on the studio and didn’t find anything new here other than the inclusion of a lot of time on Alan Hofmanis who is the studio’s man from New York. He travels the world promoting the films. (Sadly he is the least interesting thing in the film.)
If I was to have any serious quibble about the film, it’s the lack of clips from the films themselves. Yes we see them filming things but we really don’t get any real look at the films themselves. Clips would have made the film better.
If you’ve never seen a ‘Wakaliwood’. film or know about the films they produce this is a must.
Posted by Steve Kopian at November 21, 2021