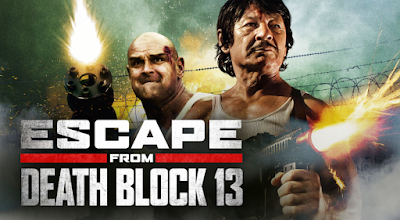 When his brother is killed working for a mob owned business Mick Kovacs goes to collect the money owed. When they try to beat him up he beats them up and ends up framed for murder. Kovacs is then sent to prison where he runs afoul of the scheming warden.

Robert Bronzi returns in a kick ass action film. You know Bronzi, he's made a career in low budget films thanks to his uncanny resemblance to Charles Bronson. While he isn't the greatest actor ever he has improved with each film and now can actually hold his own with those around him. He is a now a really good action star and I actually look forward to each new film.

ESCAPE is a great popcorn film. It doesn't seek to reinvent the wheel, but it spins it really well. I enjoyed the hell out of it. Sure the CGI is distracting, but by the time it really kicks in during a prison riot you won't care because you are going to be like me and want to see how this plays out.

In no way is this high art, but it is really entertaining which quite frankly is enough.

ESCAPE FROM DEATH BLOCK 13 hits VOD today and is worth a look.