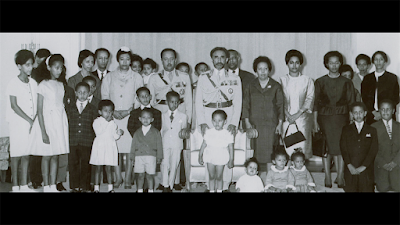 This is the story of Yeshi Kassa. Her great grandfather was Ethiopian Emperor Haile Selassie. She grew up on Ethiopia and her life was thrown into chaos when  a coup deposed her grandfather. Decades on she decides that she has to reconnect to the past and open the closed doors hiding the things she does not want to deal with. The result is a film that is not only about the past  but about today and not just a country far away but about the land inside ourselves.
Belt in boys and girls this is one hell of a ride, so grab some popcorn and buy a ticket.
I don't know where to begin. Perhaps with part of an email I sent to my friend Wendy after I saw it. She asked me what I liked about the film, to which I said:
"I like the mix of history and personal story. I love how we follow Yeshi through her personal journey- a journey which challenges her, she refuses to deal with things (and ends up in therapy) but then pushes through. I love the connection to Bob Marley who pops up and even clarifies things for Yeshi. Who was her grandfather? Marley explains it to her.
"This isn't a film about the past. Its about the now with the film connecting us to events in Ethiopia all along the way right up to now with the unveiling of a statue of Selassie. Its also a story most people- even in Ethiopia don't know. Yeshi asks a woman in Ethiopia about certain events and she says she doesn't know abut them.
"What I love is the story isn't what I expected- either the present story of Yeshi, or what happened in Ethiopia. Yes some of it would be in the news, but much of it isn't the sort of thing most histories would record except as a footnote."
This is just great on so many levels. Yes, it's a fantastic and unexpected story but the filmmakers frame it in such a way that we can relate. Yes it's literally about royalty but what Yeshi is feeling the trip she is making into her and her family's past is one we can relate to. How much do we really know about our pasts? Do we really want to know or do we want to remain ignorant? More importantly Yeshi is relatable. She breaks down, she has problems exploring the past,. The result is she is us and not some super woman.
I was moved. More importantly I as excited enough about the film that I started to send off emails and messages to friends to tell them about the film. This wasn't a film to watch alone in the dark but to sit up and discuss.
This is one of my favorite films of this years DOC NYC.
Highly recommended.
The film is getting multiple screenings at DOC NYC all with post screening Q&A's so if you're in NYC do make an effort to go.
Posted by Steve Kopian at November 14, 2021