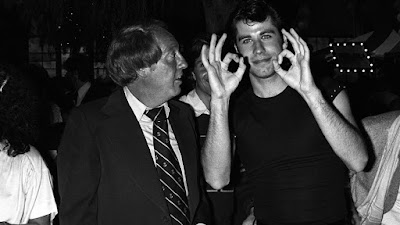 This is a look at producer Robert Stigwood who is best known as the manager of the Bee Gees and the producer of SATURDAY NIGHT FEVER.

Actually Stigwood was more than we realize, he was the man whose work shaped the 1960's 70's and 80's. Stigwood's work resulted in the soundtrack for much of the much of the world during that time frame. He was the man who gave us The BeeGees, the Who, Clapton (and related super groups), Jesus Christ Superstar, Sweeney Todd,  Hair, Pippin and Saturday Night Fever.

While I like the film I don't love it. Stigwood is a cypher through most of it. It's not the filmmakers fault, Stigwood only really opened himself up to very close friends. Additionally so much of his life and career are rushed through so that the film can focus on SATURDAY NIGHT FEVER.  While that's all well and good, there is a great deal more to that story that could be told as well.  Stigwood did a a great deal and we only get to see the cherry (I mean what about his later theater work which gave us classic shows and won Tony awards?)

Definitely worth a look for those curious about the man who saved disco from death.