Evil in the Woods (1986) Thanksgiving Turkey 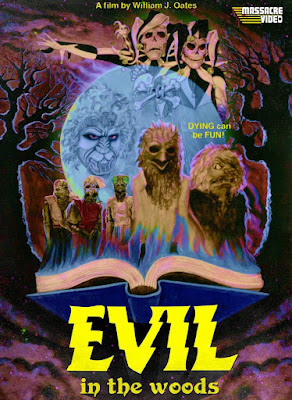 Utterly awful film has a kid reading a book about a crew making a film bout aliens and bigfoot and it kind of coming to life.This is a bad movie on every level. I know some people like it in a so bad its good way but this movie just is terrible on every level: the sound comes and goes, the acting is dreadful and the script is such a mess that it requires both title cards and a narrator to move it along.

Who is this for? I don't know since there is a little kid as the main character but there is some nastiness along the way. It feels like it should be for kids except that it's  not.

Watching this I stared at the screen in disbelief and was hopeful in a WTF sort of way... and then it hit me that there s no joy to be had here because this movie really sucks

Avoid at all costs
Posted by Steve Kopian at November 22, 2021