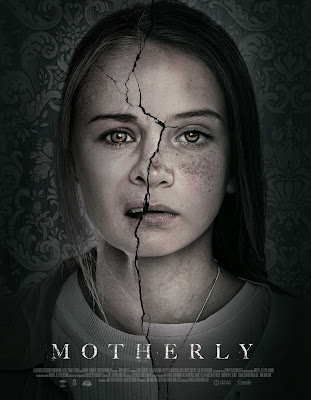 Motherly is the story of a mother and daughter who have retreated into a cabin in the woods. The mother and the daughter are there to get away from turning states evidence against the father who was found over the body of the daughters friend.  However things begin to take a dark turn and mother will have to fight to keep them all alive.

Of course things are not as clear cut as that. There are secrets untold (for now) causing things to fester under the surface. Things are not as we initially think and by the time the film ends we’ll have taken a wild ride to the revelations.

Well made Motherly moves are a great pace. It moves like the wind keeping us interested and invested, even as we get possible hints as to where this is all going. On the plus side even if you deduce where it’s going you won’t guess how its getting there.

This is a nifty and bloody thriller that’s worth a look.

Email ThisBlogThis!Share to TwitterShare to FacebookShare to Pinterest
Labels: canda, horror, The Blood in the Snow Canadian Film Festival 2021