A note on Flash Forward at The Japan Society 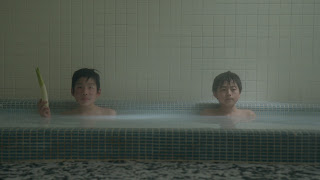 The Japan Society’s Flash Forward : Debut Works and Recent Films by Notable Japanese Directors starts Friday and it’s a super series show casing new directors and the early works by some up and comers. The series runs from December 3 to the 23rd on line. Some of the films are free and some are available for a nominal fee (Details here) .  I should point out that a killer all inclusive deal which has to be purchased before the festival  starts (ie, it end December 2nd) Details here.
All of the films will be running for the whole fest. There will also be a couple of in person screenings on December 11 and 17th at the Japan Society (again details here) I will be covering as many of the films as I can handle. Reviews will be running through the festival, with the reviews of the in person films running closer to the dates they are screening
Posted by Steve Kopian at November 29, 2021