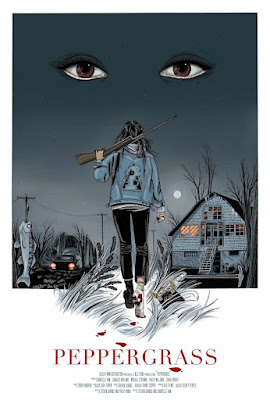 Despite what the write up says and despite it playing ata horror film festival PEPPERGRASS is not a true horror film. It doesn't have monsters or a traditional bad guy instead it has a fight for survival and is actually more a thriller than anything else.

The plot of the film has a young woman and her partner going off to rob a hermit like friend of the family of a valuable truffle. It seems like the pandemic has wrecked their business and they need quick cash to survive. They eventually make it to the home of their target but things just go sideways.

For example the film takes a lot of time building characters. There is a great deal of talk before anything happens. It sets the mood and builds the characters. And about those characters they aren't completely likable. These aren't plucky people we fall in love with but wounded individuals who are at the end of their rope.

The film is deliberately paced. It doesn't move like the wind. We feel the time pass at times as the pair drive across Canada, as they end up stuck in their care or have to navigate through the woods. The pacing is deliberate because we ae supposed to feel what they are feeling on screen.

I had a good time watching this. I loved where it went and I loved that it took it's own path getting there.

Email ThisBlogThis!Share to TwitterShare to FacebookShare to Pinterest
Labels: The Blood in the Snow Canadian Film Festival 2021, thriller