PRISONERS OF THE GHOSTLAND is hitting Shudder 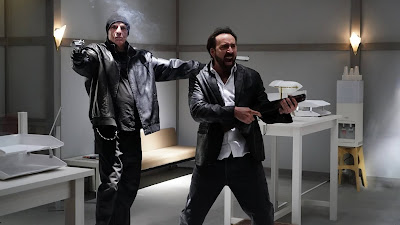 Nic Cage plays a bad ass bank robber in a post apocalyptic world forced to go get the "granddaughter" of a war lord.

Sion Sono makes his first English Language film and it is completely batshit crazy and then some. Mannered, over the top and completely crazy PRISONERS is set in another place and another time part old Japan, part old spaghetti west and part post apocalyptic toyland. Its as if every idea anyone ever had was thrown into a blender and this was what survived when it was poured out.

No one acts, they over act. Everyone is deadly serious and not.

The script looks like it was made up on the spot with sequences often playing like it was a rehearsal instead of a take.

Its all over the place and a complete and total mess.

It's a horrible film and not.

Its a one of a kind nightmare that Sundance did a disservice by running streaming since this film needs an audience. This is a movie that MUST screen  in a theater (or living room) with audience as big as possible. It need to be talked to, talked at and cajoled. It needs to be made fun of and embraced.

How you see this film will determine you love or hate of it.