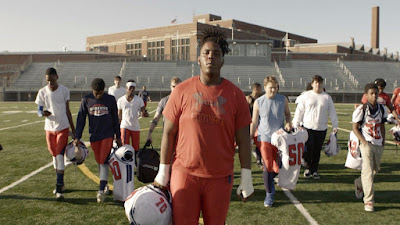 This is the story of two high schools in MilwaukeeWisconson, the almost all white Shorewood High and the almost all black Messmer High who came together to form one football team that became state champions. Messwood, was hailed as mdel of racial harmony however events threaten to over take them.

This is avery good sports documentary that hits all of th right notes with absolute perfection. Its a film that looks good, moves like the wind and makes you think and feel. It's a film that does exactly what it was desgned to do and does it to perfection.

And that is the only problem with MESSWOOD it feels like a perfect Hollywood feel good blockbuster but in documentary form. While the film has some surprises  the construction is such that you know before hand where the high and low points are going to be  to the oint that you can almost sing along.

I'm not saying this because the film is bad, oh hell no this maybe one of the best and most crowd pleasing films at DOC NYC it's more that as much as I love the film I just wish it wasn't so slick so that I could have some place to hold onto and keep it close to my heart.

QUibble aside MESSWOOD is a great film and worth a look.