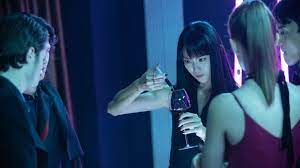 Dead and Beautiful is a form over content “horror” film. It’s the story of five rich bored friends who set up adventures for each other in the hope of ending the boredom finding that they have become vampires after one adventure goes wrong.

Its not that scary or that exciting as the film seems to be more interested in exploring notions of how we see life and how we interact with each other. It could have been an interesting change of pace but the construction of the film doesn’t allow for it.  After the set up the film then has the characters explore what being a vampire really means. The rules of this iteration of being a vampire are interesting and I looked forward to seeing what the film did with it.

Unfortunately somewhere around the midpoint the film shifts and we get a film that tosses the fear for drama as the dull boring characters have to deal with what their situation means and how it effects their relationship. It might have been interesting if we had interesting people on screen but everyone is so self-absorbed we never care.

While the film most definitely looks great there isn’t anything here beyond that.