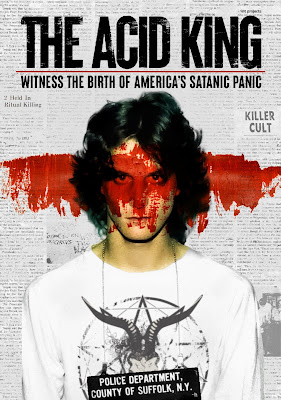 A look at the case of Ricky Kasso  in Northport Long Island in 1984. Kasso killed a friend over some stolen drugs and the whole case became the center piece of the Satanic Panic that was sweeping the country at the time.

Told via contemporary clips and the words of people who knew Kasso and the people involved in the case THE ACID KING seeks to set the record straight by correcting the almost four decades of twisted retellings. Its a film that explores what it was like growing up on Long Island at the time, how something like this could have happened and how the case influenced the world afterward.

This true crime doc is everything you need to know about the crime and then some. Covering pretty much every aspect of Kasso's life and the aftermath of the crime you are going to walk out of the film feeling as though you were there.  While I could argue with some of the generalizations about life on Long Island, having been a life long  resident, I cant argue with the portrait it paints of the community at the center of the tale.

If I as to quibble about the film it's that despite being thorough, its wildly over long at two hours. Yes its all here, but the pacing makes the film a tough journey and as much as I enjoyed the film I had to watch the film in two parts because it felt long.

Quibble aside this is a must for anyone interested in true crime or the Satanic Panic of the early 1980's.