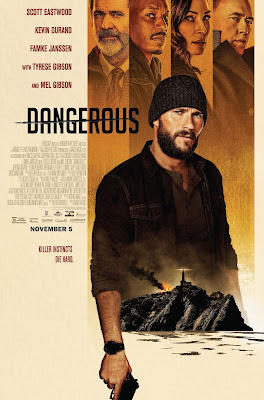 Scott Eastwood plays Dylan Forrester a man on parole. He has psychopathic tendencies and  He is living in an apartment dealing with his demons, taking his meds and talking to his shrink (Mel Gibson). He takes joy in the letters from his brother who has bought an island and is renovating the buildings there. Not long after Dylan's brother dies, Dylan finds a man rummaging through his things. Dylan beats the man up and then heads to his bother's funeral. The FBI isn't thrilled he jumped parole and tries to find him. Arriving at his brother's home Dylan finds he isn't welcome. His mother wants him gone despite his insistence he isn't like that any more. Things take a turn for the worse when some really bad men show up. They used to be Dylan's friends, and everyone think they are there for him, but they are there for something else and they won't stop until they get it.

I love this film. A glorious mix of drama, thriller, action and humor this film will keep you on the edge of the seat as it peppers you with some well placed humor.

The film is put together three act structure. The first third of the film is a drama. We watch as Dylan tries to deal with his illness and his family. There is a lot of tension as Dylan tries to make things right. The second act is the arrival of the bad guys and the setting up of the thriller - what are they after? The final third is Dylan taking the gloves off and saving the day.

The performances are wonderful. I especially love Mel Gibson as Dylan's shrink. He's funny in his brief scenes trying to help Eastwood. His asides are genuinely funny, and despite being pretty much on his own he is a key part of the film.  The other performance that stands out is Scott Eastwood. While he has always been a good actor this is the first time he really was truly great. Eastwood is working with a great script that allows him to really shine. And while Eastwood channels his dad a couple of times, its not gratuitous rather he does it for great effect.

And as for the action, its really well staged. The fights are visceral you feel the pain of the characters. It helps that everything that happens has a cost. Teeth are spit out. While not super spectacular by most Hollywood standards its realistic which makes it more effective.

If you love action this film is a must.

How much do I love this film, I'm hoping for a sequel.