DOC NYC 2021 Capsules: COLORS OF TOBI and GO THROUGH THE DARKNESS, 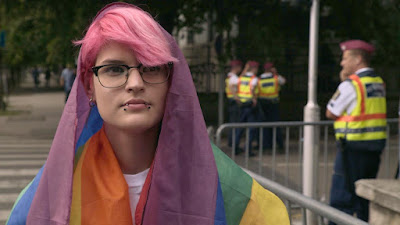 COLOR OF TOBI
A young man comes out as transgender to his parents. As Tobi goes through the process of making his identity legally, his parents also deal with the changes that the transition brings.

Excellent look at one family’s journey in the wake of one member’s coming out as transgender. What sets this film apart from most films is that the film doesn’t focus just on the person transitioning but the whole family. I have watched many films about people transitioning and in most cases the family is pushed to the side.  Until this film it seems that most filmmakers didn’t care about the families.  Because of the focus this is going to be a film that is going to help many people come to terms with the changes of their loved one have made. GO THROUGH THE DARKNESS|
This is a portrait of young Guanglin and his father. Guanglin is a young man who is a champion of Go. He is  a champion despite being blind, thanks to an incredible memory.  His life is nothing except playing the game as he works toward a life as professional Go player.

My reaction to the film is mixed. While I was amused at the start as Guanglin plays in a tournament that will determine his amateur status and is opponents were amazed that he could play with out seeing the board (he uses a special board and pieces that he can touch) my feelings towards it all shifted as I became troubled by the relationship between the father and son. Guanglin is clearly socially backward, really only interacting with his father. At the same time the father is rather creepy since he has pulled his son from school and is insisting that Go is the only thing that he is going to do. In a way I felt dirty since the father is so controlling, I kept wondering why child protective services weren’t involved and realized that it was China. It left me feeling uneasy.

To be honest, this is an interesting story but I’m not sure I need to see it again.