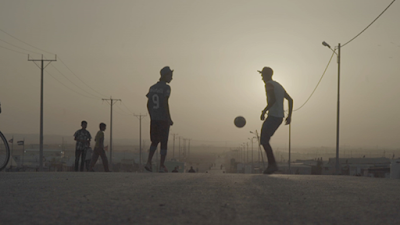 This is the story of Mahmoud and Fawzi who are living in the Zaatari Refugee Camp in Jordan. They are Syrian refugees and they are dreaming of making it big and becoming professional football (soccer) players. They are focusing on football to the point that it is making their parents a little crazy. However they are good enough that when scouts come to the camp they have a chance of actually making their dreams come true.

Shot over six years Captains of Zaatari is a documentary that more often than not looks like a narrative film. To be perfectly honest I had no idea what it was going in only the subject matter. However when I was watching it I was completely confused since there was a naturalness that you only see in documentaries but at the same time the sequences often look like they were from a narrative. Additionally the film frames the discussions between Mahmoud and Fawzi in such a way that this is actually a true life buddy film. If you need proof just watch the final sequence.

Clearly director Ali El-Arabi managed to make everyone on screen feel at ease because other than one or two times where a little kid mugs for the camera no one pays it any mind.

As observational documentaries go this film is top of the line. It is a film that firmly puts us into the lives of Mahmoud and Fawzi and their friends.  I kept watching the film in large part because I really had a sense of life passing before my eyes, both the ups and downs.

If there is anything wrong with the film it is that the film can be a bit too low key or matter of fact.  Kudos to director Ali El-Arabi for not manipulating our emotions, but at the same time I really wished once or twice he had goosed us a bit.

At the same time this is a solid film and worth a look for anyone in search of solid observational documentary.