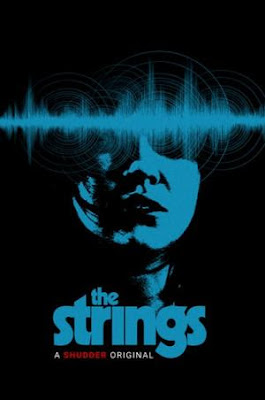 Musician goes to her aunts seaside cottage in the winter and slowly becomes unhinged.

Moody thriller gets a lot of points for looking good, casting a plus sized woman in the lead and having atmosphere to burn but it loses a few for a slow pace and not sticking the landing.

While not bad THE STRINGS never fully soars. The problem is that the film doesn't do anything we haven't seen before. Yes, the film has moments where it is properly chilly, however it never quite pulls it all together to be something unique.

On the other hand the film does have Teagan Johnson in the lead. A stunningly beautiful young woman who is not the tyical petite girls that normally occupy the leads of most similar films. She gives us a reason to watch the film because she is just so damn good. IMDB lists this as her first role, but if we are lucky this won't be the last time she blazes across the screen. She is a force of nature and this is her calling card. I want to see more from her.

And if you need more to look at than  Ms Johnson THE STRINGS has a great look. The images are vital to the story and set a mood  from the first frame. This is one of the best looking horror films of the year.

Quibble aside THE STRINGS is worth a look, if only to see the Teagan Johnson before she becomes a superstar.