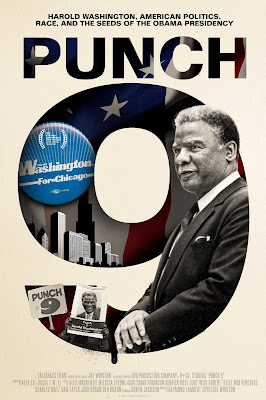 PUSH 9 FOR HAROLD WASHINGTON is one of the great surprises of this years DOC NYC. The film is a portrait of Harold Washington who left congress to run for Mayor of Chicago. He was the first black person to lead the city and what he did  and what he accomplished in his short time in office is still reverberating  to this day, with the things he did acting as a blue print for every minority candidate that followed.

While there are some talking heads in the mix, most of this film is made up of film and video footage of Washington in action. We watch the man in action and we get to hear his words.  The result is we fall in love with the man and what he was trying to do. It  also helps that we have the ability to look back over the decades and see that Washington’s insistence on playing the long game bore fruit that we are still picking today.

While there is much to celebrate in what we see, there is much to cringe about as well.  The racism that Washington’s candidacy exposed is frightening. If you want to know why hate is still dividing the country you only need to see the footage of the Republican’s screaming like animals and throwing rocks at Washington. Hate that deep doesn’t go away quickly.

One thing that filled me with sadness was watching the commercials for Washington’s opponent Bernard Epton which were created by the National Republican committee which inferred the destruction of white people if Washington was elected (Epton before its too late).  Its chilling, especially considering the Republican parties recent slide toward fascism to see the roots started growing almost four decades ago. However what truly broke my heart was watching Epton‘s son break down talking about the ads and how his father was speaking at campaign rallies that looked like the ones Hitler held in Nuremberg. He was clearly ashamed of his father.

While we should be ashamed for the bigots who fought against Harold Washington, we should take great pleasure knowing that a man like Washington walked the earth. By choosing to step into the fray and to take up the fight he made the world a better place and changed everything that came after him.

PUSH 9 is a magnificent portrait of a hero for out time. While the things he fought against are still with us, the film reminds us that if we can follow in Washington’s footsteps we can begin to move the line in the right direction and make the world a better place for everyone.