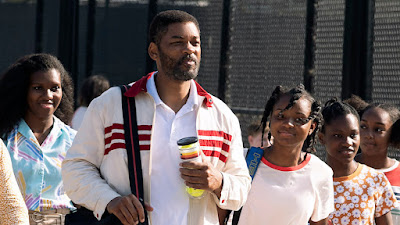 This is the story of Richard Williams  who is the father and coach of Venus and Serena Williams and charts his course to making them superstars.

The crazy love that KING RICHARD has been getting from some quarters puzzles me. While it's a good film, and one I enjoyed, isn't that great. Its kind of one note, kind of cliched and there are all sorts of tnarrative problems that severely weaken the film.

The first thing that is wrong is that the film is so tightly focused on Richard and the moment we have no sense of anything outside of what we see. While there is no doubt that the Williams are focused on making the girls stars there is nothing outide of that. Talk of any life outside of that is missing. The three daughter not Serena and Venus are cyphers and could have been cut ut and you'd never know they were missing. Richard's other children and inferred infidelities only are mentioned in one dramatic scene that exists just to give the film a "powerful moment". It's an artifically inserted scene there just to add shading.

Seeing the other kids scene I truly understood how much was left out of the tale. We see nothing outside of the narrative thrust and I am left to wonder how much was cut out of the film? Other sequences have none of the consequences it should. For example the death of the gang member who beats up Richard seems to be heading toward something, say a dramtic moment or at least a mention but it happens and then falls into the void. Nothing happens in the film unless it is needed for just that one moment with the result much of the film seems empty.  .

The other and most serious problem is there are no characters. There is no sense of who anyone is and how they relate. Yes we see the Williams family but outside of Richardwe have no sense of who anyone is. Worse even Richard is extremely lacking. The kids are all happy faces, always smiling. At best we barely get any sense of of the difference between Venus and Serena. They are interchangable. We get no sense of the real talent of either despite being told how god they are. Why are we sold that Serena the best that ever played when we really dont ever see her play? Who is Richard Williams wife? There is no sense of her? Yes, Aunjanue Ellis is stunning in the role but it's all because of her talent and not because of what's on the screen beyond her presence. There is zero sense of who she really is, nor and most importantly why she is with Richard. There is no sense of anything. There is no scene that says why she believes in him, why she loves him or why she stays with him (especially when its implied he's messing arond behind her back). She is,like everyone else a cardboard cut out to be moved around.

As for Will Smith performance...it's not that good. Honestly it's quite bad. He never fully disappears into the role.You can always see him playing get an Oscar. His whole performance is his hunched stance and affected speach pattern, which seems to be a dumbed down version of the real Williams'way of speaking. Smith never gives us any sense of the man behind the facade. There is no sense, beyond his persistence, why he managed to get anywhere.  I say this since after seeing the film I watched some video of Williams in interviews and after a few minutes you got the sense that he was more in control than it seems Smith's performance. I never understood why after playing all the games with the coaches and sponsors that no one told him to to go to hell and take the kids and get out. It simply seems like he is a lucky but not particularly bright guy. I can't see him getting an Oscar when his other nominated roles in ALI and THE PURSUIT OF HAPPYNESS and his Oscar bait role in CONCUSSION are so much better.

This is not an Oscar worthy film.

On the ther hand it is entertaining. I was carried along. I know a huge chunk of the reason was I know where it was going to go. Knowing Williams was going to be proved right made me willing to forive the narrative short falls.

Problems aside KING RICHARD isn't bad and worth a look if you're undemanding.