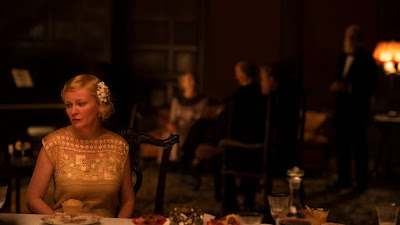 THE POWER OF THE DOG arrived at the New York Film Festival with high expectations. This story of two brothers in Montana who break apart when marries a widow and brings her and her son to the ranch they run is  on many people's list of a show in for Oscars and year end awards. The question going in was would it live up expectations.

Sadly out side of the gorgeous cinematography by Ari Wegner, I'm not certain the film will get as many as many hope.

The problem with the film is in the writing. The writing doesn't give the characters enough background. Kirsten Dunst's Rose has way too much unsaid. There is not enough back story only vague hints, but no indication that she would slide off the wagon. She like the rest of the cast is never given fully formed characters.

And as for Benedict Cumberbatch's much heralded Phil, he's is just a dick for over three quarters of the film. He is mean and ugly and the kind of guy you want to shoot  in the face. It's a one note performance where he just acts shitty. There is no indication why the guys who work for him love him, which is a HUGE problem because there is nothing to latch on to. Why are we watching him when he is just is just an asshole. That might have been okay if it didn't change in the final half hour, but it's too little to late. While Cumberbatch finally gets to show some depth, it doesn't feel completely real. The thing is some of that should have been in the earlier part of the film. I mean if he turned into a the complete jerk when his brother got married it might have made sense, but there is nothing. It's even more puzzling when we find out Phil's background as a college grad- not that grads can't be jerks, rather there is an implication that he once was a nice guy. But what turned him into the hateful shit he is?  Honestly there is nothing to the chracter for most of the film but just hate and meaness.

During the press conference Benedict Cumberbatch mentions things that were left on the cutting room floor. I'm going to guess and say that everything the film is lacking as cut out to keep the film a manageable length. It was a mistake.

Frankly I'm totally at a loss to explain the love this film people love. Perhaps they all read the book and are carrying things over.

Reservations aside the film isn't bad. Sure it's probably a half an hour too long but its still carries us along. I mean the last half hour is pretty good and the ending is....well something you need to see. ( I will not discuss it) 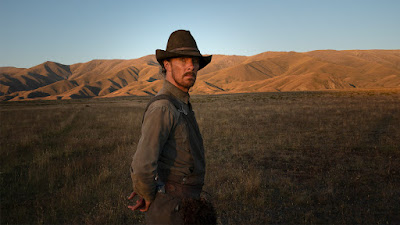