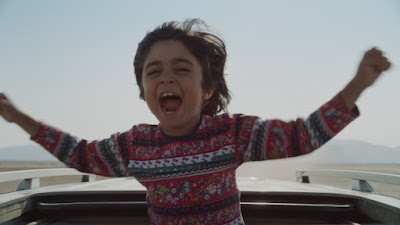 HIT THE ROAD is 90 minutes with good people.  Its an often delightful, frequently thoughtful road trip across Iran that will make you smile as it makes you think.

The plot of the film has a family traveling to the North of Iran. There is a bit of paranoia. They fear they are being followed. They panic when they realize the six year old brought his cellphone. There are car problems and things happen which I won’t get into since the point of the film is the journey.

This is a delightful film. For me this is one of the finds of this year’s New York Film Festival. I did not go into the festival planning on seeing the film, but things lined up in such away that I could see it and I am so glad that happened.

The reason I fell in love with the film and got sucked in was the non-stop craziness of Rayan Sarlak as the youngest member of the family. He is a delight. He’s the constant reminder that there is life beyond the seriousness of it all. Basically he is a hand of god mixing things up. I couldn’t help but roar with laughter as he tries desperately to keep his cellphone in case his girlfriend calls him. He know s if he doesn’t answer she will drop him. Even at six he is having problems with women.

Because of Sarlak I fell in love the rest of his family. Sarlak‘s nonsense made me connect and care about everyone else.

After seeing the film I read several reviews of the film and all of them spoke about how the film is director Panah Panahi‘s first film and his place in the pantheon of Iranian filmmakers, that include his father. That’s nice but for me the fact that he simply has made a great film is more important than any lineage.

HIT THE ROAD is a great film and highly recommended