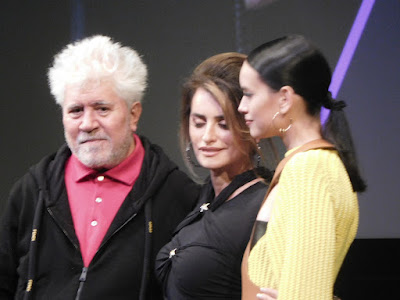 Pedro Almodóvar​'s latest never quite pulled it all together. It's not a bad film but the central section of the film probably should have been jettisoned for a singular focus on the wraparound story.
The film is abut Janis (Penelope Cruz) who approaches an forensic anthropologist about opening the mass grave near her families home. Her grandfather was taken in the night and shot  and buried in a grave during the early days of the the Spanish Civil War. Janis and the anthropologist have an affair and she becomes pregnant. While in the hospital she meets and becomes friends with young Ana (Milena Smit) who is also having a baby. The film focuses on the two women's relationship and lives before coming back to the opening of the grave at the end.(no that is not a spoiler)
The main story of the two women is good but it isn't anything we haven't seen before. Its the story of two woman going through what life throws at them and coming out on the other side stronger.  Its a story that has some laughs and tears but not a lot of surprises.
On the other hand the missing relative story is way more interesting. It opens up all sorts of doors that have all sorts of resonances about our connections to the past, how those sort of things can happen and why it takes decades to talk about it. The material is unlike anything Almodóvar dealt with before and it was handled with a passion the result of the film doesn't quite have (the final shot is deeply moving). Its a passion Almodóvar showed at the NYFF press conference when he spoke at length about the importance of remembering and coming to terms with it. With the growth of his last two films PAIN AND GLORY and THE HUMAN VOICE I was hoping he would continue to have expanded his horizons by doing a historical drama instead of revisiting past glory.
And please don't  think PARALLEL MOTHERS is bad, it's not, its just not the great film the bookends promised.
Posted by Steve Kopian at October 09, 2021