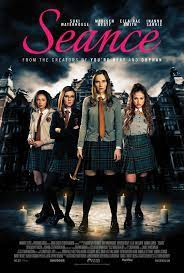 The plot of the film has a couple of sorority girls staging a fake séance to raise the spirit of a dead girl. It scares one girl so badly she leaps to her death out a window. A new girl is invited in, but she chafes at the hazing and soon things turn deadly.

While not bad and competently put together the film never generates much in the way of thrills.  The problem is the script which does nothing new. We’re way ahead of  everyone on screen and occasionally asking “why?”.