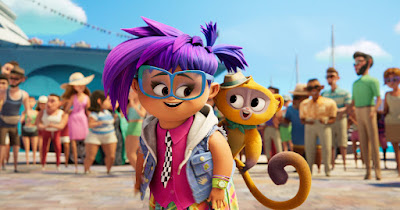 Long time coming animated film started life as an animated project from Lin Manuel Miranda started life shortly after he hit with IN THE HEIGHTS in 20210.  Dreamworks closed the project down before it was revived, finished by Sony who then sold it to Netflix.

The plot has  Vivo, a kinkajou making a trek to Miami  from Havana in order to deliver a song to the woman his deceased human partner loved. Along the way he has many adventures on his journey to find a new home.

Playing and sounding like the work of Lin Manuel Miranda (he wrote the songs and plays Vivo) this feels like a Broadway show gone weird. The songs feel very much like IN THE HEIGHTS having the same cadences of the earlier work. Additionally while Miranda  isn't listed as writer of the story, the film seems to have characters that could have come from his other works. The result is a good film, with some great sequences. that feels like it's plot and music have been borrowed from some where else.

On the other hand the film has some great characters such as Gabi, the young girl who befriends Vivo, Lutador, a python who hates loud noises and Marta, the great singer Viv is trying to find. Its the characters who make this film shine.

The film also has some great moments, including several of the musical numbers, that beautifully show what animation can do to create real movie magic.

Definitely worth a look when the film plays Animation First this weekend.

Email ThisBlogThis!Share to TwitterShare to FacebookShare to Pinterest
Labels: animated, animation is film 2021