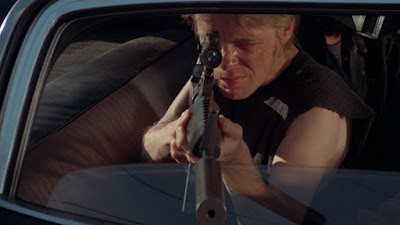 I find it funny that a number of younger film fans I know love John Carpenter’s Assault on Precinct 13 but they haven’t seen Rio Lobo the film it was based on. Oh how cinema viewing has changed over the world. I say this because I find it odd in a day when most things are at your finger tips people aren’t watching the films that influenced our cinema heroes while back in my day we seemed to search them out.

No matter, this is not supposed to be a cranky old man piece but a pointer toward John Carpenter’s classic film.

The basic plot of the film is stereotypical cinema. In a near abandoned precinct house a woefully small contingent number of cops is attacked by an army of bad guys. Mayhem ensues.

Yea, we’ve been here any number of times before, as I said it’s a remake of Rio Bravo, which Howard hawks remade as El Dorado and Rio Lobo. And that’s not to mention that Carpenter riffed on Night of the Living Dead’s siege setting. However Carpenter spices things up throwing in twists, his patented music and his knack for suspense to make the film something truly special. One can see how this film begat Escape From New York and Big Trouble in Little China.  You also understand how this film started to get him noticed and how he started to get writing jobs in Hollywood.

The film is a stunner and you understand how many filmmakers were influenced by the film- especially if they ever saw it on a big screen. I mention the big screen because the film plays very different than on a small screen. Watching Assault on a big screen is a better experience if only because you feel the isolation more acutely. There is no distraction, there is only the sound and image and it works its way into your brain. I never cared for the film until I saw it big.

And since the film is playing at the New York Film Festival you can see it big. If you’ve never seen the film or never seen it on a big screen I highly recommend you make the time and do so when the film plays NYFF.