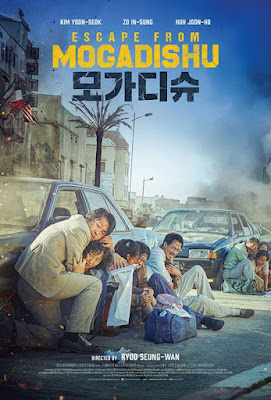 ESCAPE FROM MOGIDISHU is the true story of the Korean diplomats from both North and South Korea who had to put aside their petty sniping and work together and get out of the city and Somalia when the country exploded into full blown civil war. It’s a crazy story that will ultimately move you.

Full confession having seen, and been excited by the trailer for the film I was ready to turn the film off about fifteen minutes into the film.  I was looking for a tense thriller/action film and what the early part of the film is recounting of some of the games being played between the two Koreas in a far off land. While it introduced the characters, there was a silliness that really didn’t work for me. It wasn't all that exciting.  I stuck it out, which was good because once things get going this is a killer suspense film. About 25 minutes in some one turns the suspense knob to 50 and it never lets up until the end.

I have no idea how gospel true this is, but god damn some of this is wild. From the group of diplomats being confronted by little kids with big guns as they begin their flight to "safety", straight on to the mad dash in cars with jerry-rigged armor this film will blow you away.

What I loved is that the characters remain always in focus. This is always about the people which makes it even more tense. I was so invested that the fate of one of the characters broke my heart as did the final goodbyes of two groups of diplomats who had to stop being a family forged in fire.

This is a stunning film and recommended.